Most gun owners in the US buy guns for self-defense, and with the high numbers of home invasions and robberies, their decision is quite justified. In fact, according to a study done by the Department of Justice in 2017, over a million burglaries and home invasions happen every year. And a lot of the times, the burglars are armed.

Well, in reality, neither one of these categories can be the end-all-be-all self-defense weapon. The ideal home defense weapon needs to be catered to the requirements of every shooter – consider factors such as the environment of your residence, state laws, and even your comfortability with different firearms.

All three kinds of weapons can be effective. But, their effectivity is based on the user and situation. If you want to know which is best for you, you should check out the rest of this post so you can make an informed decision.

So now, let’s talk about the benefits and drawbacks of each weapon platform, and try to understand where they fit in.

When it comes to home defense, one of the biggest problems to consider is over-penetration. You want to shoot at an intruder, but you don’t want the bullet to pass through them, and hit an innocent bystander, or a member of your family.

How the walls are built should be taken into consideration. Are the walls made of thin dry walls or concrete?

If your home has thin walls, you should make sure that you favor higher capacity. Higher capacity, meaning your firearm has more bullet rounds versus a higher caliber.

Moreover, using the right kind of ammunition, like hollow points, can also help you prevent over-penetration.

The Layout of Your Home

You should also consider the layout of your home when you’re choosing a home defense weapon. When you are indoors or you live in a small apartment, moving around with a shotgun or rifle with an 18-inch barrel is not ideal.

However, if you have a very spacious home, and large grounds to protect, you will need a rifle that has a longer range.

In the US, firearm laws can vary significantly from state to state. Some states like New York and California have very strict laws against the possession of assault weapons or rifles.

Typically in home defense forums, some people would say that “Caliber over Capacity”. But we believe that in most self-defense cases, higher capacity trumps higher caliber – unless you live in a state where capacity is regulated.

In such states, it is important to make sure that your self-defense weapon is practical while complying with the laws as well.

Who will be using the firearm? Will it be you or a family member? Are they a beginner or are they experience shooters?

If they are beginners, it’s best to pick a handgun that can be easily handled and has a low recoil. Although shotguns would be easier to aim with their longer barrels, they are also heavier.

Shotgun vs Rifle vs Pistol

Pistols can be very versatile as self-defense weapons. They are small, easily concealable, and very maneuverable. They generally offer more capacity than a shotgun, and with the smaller pistol caliber bullets, the chances of over-penetration, and concussive shock when firing indoors are also lower.

On the other hand, pistols don’t generally have the kind of stopping power you can get from a shotgun or a rifle. If you are using a pistol for self-defense, it is important that you choose a capable caliber like 9mm, 45 ACP, or perhaps 40 S&W. Even with these calibers, it may take up to three to four shots to put down an intruder.

Sometimes a single shot can be enough to deter an intruder. However, that is not something that you can rely on, And, it is important to train with a pistol to make accurate and quick follow-up shots if you are going to use it for self-defense.

Pistols are ideal for environments where you are living in close proximity to others, and the walls of your home or apartment are thin. In such cases, rifle rounds can penetrate through multiple walls. You might be thinking that you should use a shotgun instead, which spreads the plates and decreases the chances of over-penetration. Well, even that is not ideal in a confined environment of an apartment building, or city home with thin walls.

Legally, shotguns need to have 18-inch barrels in most states and wielding a firearm that long can be problematic. So, a pistol, preferably with hollow-point rounds is perfect for home defense in such a situation. Since it inflicts more damage and almost illuminates the chances of over-penetration since the pullet expands in the target.

Moreover, in some states, like California, where gun laws for modern assault rifles can be a little strict, a pistol is a really good option for self-defense.

For home defense you should ideally opt for a full size pistol, which will have a high magazine capacity, and full grip for more control. Moreover, make sure that the caliber is capable of self defense. Pistols like the Walther P22, Beretta M9, Glock 17, 21, 19, 43 and Sig P320 are really good options for home defense pistols.

For more on pistols for home defense, you can check out our reviews on the Best Self Defense Handgun and Best Guns for Beginners.

Shotguns are also quite common for self-defense. They have the benefit of having very high stopping power, and low chances of over-penetration. However, of course, the type of ammunition you use will make a lot of difference.

Over penetration can be a concern if you live in an environment where the walls are thin so using birdshot or buckshot is better than using slugs. Buckshot can over-penetrate in some cases, but the chances are still low because of the lower velocity of the pellets.

Another benefit of using a shotgun is that they are much easier to aim. Since the pellets scatter, there is a higher probability of hitting your target if the shot is slightly off. Furthermore, a single shot from a shotgun is enough to put down any intruder.

One of the drawbacks of using shotguns is their size. With an 18-inch barrel, wielding a shotgun can be difficult. If you shoot a 12 gauge shotgun indoors without hearing protection, the noise will be quite concussive, and you can expect some ringing in your ears.

In some states, it is a little easier to get a short-barreled shotgun, however, you still need to pay more, and the paperwork can be an issue.

So, if you live in the suburbs, where your home isn’t as small as an apartment, and maneuverability is not an issue, a shotgun can be very effective. Now, if you are looking for a home defense shotgun, you have multiple options, you can either go for a pump action shotgun, a tube fed semi-automatic, or a magazine fed semi automatic shotgun.

If you are on a budget, a pump action like the Remington 870 is perfect, however, if you can spend some extra money, I’d suggest the Benelli M4 tactical shotgun. The Mossberg 590 and Beretta 1301 are also excellent options.

You can check out these tactical shotgun options as well.

Though some people think that using a rifle for home defense is a bit overkill, there are certain situations where a rifle is ideal.

Using a rifle for home defense has several advantages – you get more stopping power, more range, and more control on your rifle. Furthermore, believe it or not, there is also a psychological factor that makes rifles a lot scarier than pistols or shotguns, so even the sight of one is enough to scare some intruders away.

Also, depending on your environment, a rifle might be the best choice. For instance, if you live on a farm or a ranch, with wide stretches of land to cover, the long-range capabilities of a rifle can be very helpful. Moreover, with assault rifles like the AR-15, you get high capacity and a lot of stopping power, but that’s if you live in a state with more relaxed laws. For instance, in a state like California, you’d be much better off with a pistol or shotgun, since they will be easier to reload.

The problem with rifles is the chance of over-penetration. So, you should use a relatively smaller caliber, like 5.56. Larger calibers can also be a lot louder and a bit overpowered to shoot inside your home, where your family lives with you.

In this category, there are few rifles that can compete with the AR-15. The 5.56 is a very capable round, but it is still on the smaller end of rifle cartridges. It has decent range, and is very easy to control in the AR-15 platform. If you aren’t an AR guy, I’d suggest getting an AK, preferably in 5.45.

In recent years, Pistol Caliber Carbines have gained a lot of popularity for self-defense. They are smaller than rifles and shotguns, but with a longer barrel and brace. They offer more control and range.

They usually have higher capacity magazines, and if you are using hollow point ammo, the chances of over-penetration are also very low. Some of the most popular PCCs in the US are the CZ Scorpion EVO and the Sig Sauer MPX.

These rifles can bridge the gap between rifles and pistols, and offer a much more capable and safe platform for home defense.

It is important to note that there is no one best weapon platform for home defense, it is always going to be situational. However, it is important that you train with whichever weapon you choose because the capabilities of the shooter are a lot more impactful than the capabilities of any firearm type. Make sure that you’re also able to reload quickly with your firearm because the threat will not wait for you.

We hope this post helps you choose the right self-defense platform for your specific needs. If you have any thoughts on which firearm is better for home defense, do let us know in the comments below! 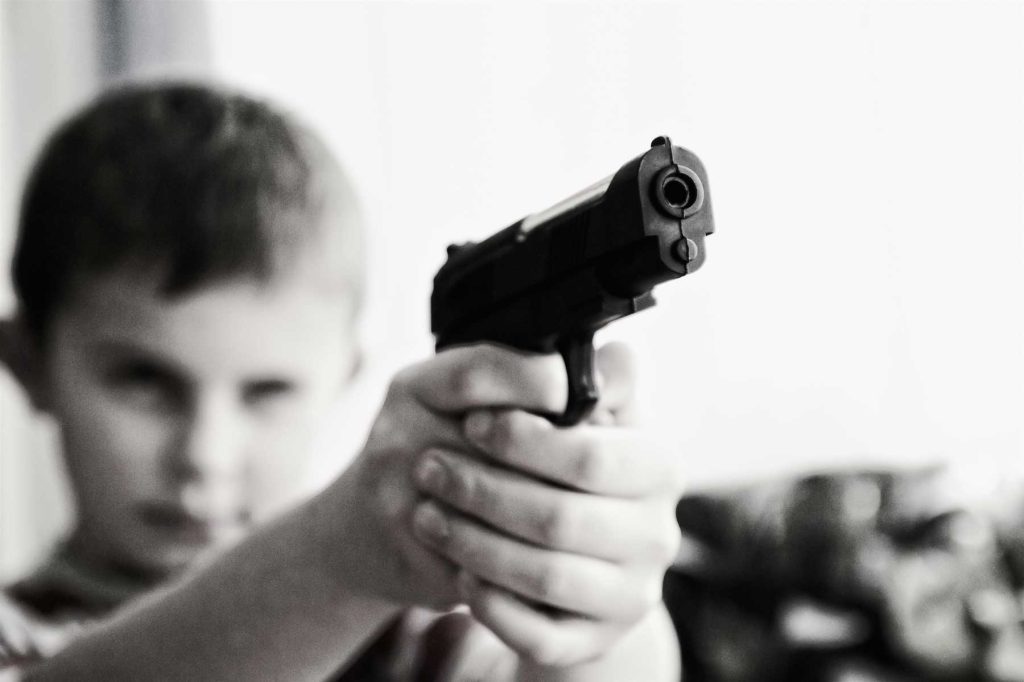 How to Teach Gun Safety to Kids